The John Wick series has more or less been a miracle, not just in revitalizing Keanu Reeves’s career, but in the modern R-Rated action movie. While there certainly is the rare Mad Max: Fury Road or Baby Driver or other auteurist work, the action market is largely populated by the same PG-13 or other franchise building works, and the days of the gloriously goofy action films of the ’80s or ’90s seem to be lost. What’s great about the John Wick films is that they’re not just throwbacks; through their dazzling visuals, creative world of assassins and hitmen, and innovative combination of gunplay and kung fu, the John Wick films have created a new subgenre that pays tribute to that spirit whilst forging a new direction.

With John Wick: Chapter 3- Parabellum, director Chad Stahelski and Keanu Reeves have created another pulpy, highly detailed spectacle. It doesn’t quite match the perfect emotional resonance of the first film or the pure nonstop adrenaline of Chapter 2, but with Parabellum, the pair have crafted an immersive thriller about consequence and will to survive. These films are able to get everything out of their concept; the story is simple, but the attention to detail and unique vision of a multi-class society of covert assassins and their order makes it feel lived in and nuanced.

After violating the rules of the Continental hotel, John Wick (Keanu Reeves) is declared excommunicado by the High Table and has a $14 million bounty placed on his head. Desperate to escape the forces of the High Table, Wick calls on favors from former allies and seeks out past alliances in order to survive. There’s an intersting story here about the fallout of past actions, both good and bad, and it’s enough to justify the glorious action spectacle that follows.

The film is simply packed with action sequences, but the great thing is that the non-action scenes are more than placeholders. The highly specific world allows for a wealth of great characters, and the film features a great supporting cast of character actors that are able to come in, play up their eccentricities, and then exit. Each actor gifts the screen with a certain weirdness as to best counter the steely Reeves; Halle Berry in particular makes for a great foil, and franchise regulars Ian McShane and Lance Reddick both have a blast as Wick’s allies at the Continental. Also having a blast is Laurence Fishburne, Reeves’s Matrix costar, who’s able to feel like he’s improving each scene, yet still feels like exactly what the film needs in every scene he appears in. Each actor is able to imply an entire history that’s never explicitly stated, and the brief glimpses of different parts of this society make it all the more exciting.

What is there to say about the action that hasn’t already been said before? The amount of work put into the stunt coordination is evident, as is the filmmaker’s desire to diversify what we’re seeing. There’s a great number of chases, but each chase too similar, with each scene feeling like it’s own self contained, mini adventure. The brutality of the violence is often used for great comedic effect, but seeing the love and hard work put into the film makes me even more invested.

The last fifteen minute actions sequence of the film is straight up the best onscreen action I’ve seen since Mad Max: Fury Road; incorporating all the best elements of noir, Eastern cinema, and the action films Reeves has built his career on, it’s the best possible execution of a sword fight that you could want. There were shots in the film that made me audibly gasp; the use of color and shadow, usually used through fluid long takes, does more to establish the mood and tone of the film then dialogue ever could. The craftsmanship is exactly why these films are a cut above most action films; watching the trailers for other action films in front of Parabellum only made me notice the difference more.

At the heart of it all is Keanu Reeves; the brilliance of the role isn’t only the self awareness, but how Reeves plays to his strengths. Behind the sternness and bluntness, there’s a deep sadness in the role, and if you look, some wisdom- something that sums up the appeal of Reeves as a performer. Reeves has been in many of the great action films of all-time (The Matrix, Point Break, Speed), but he’s never had a role like this, where he’s a highly qualified, entirely lethal, very lonely guy who doesn’t neccessarily save the day or get the girl. Parabellum is the culmination of the character’s arc, one that mimics the classic movie spectacle of a Chaplin or Keaton; he’s the unbeatable guy with the will to persevere no matter what. Grade: A- 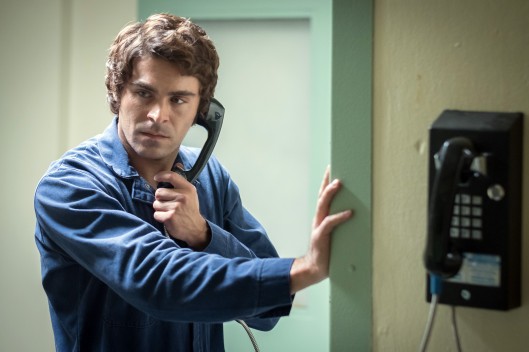 To say that Extremely Wicked, Shockingly Evil and Vile boasts Zac Efron’s best work would be an understatement; Efron has always been an enigmatic leading man because he always feels like the easy choice to cast, and while he’s excelled at comedy work, this is a role that really challenges him. His performance here isn’t just that of a murderer, but that off a con man. The film presents Ted Bundy’s crimes as a mystery in which we know the answer ahead of time, but it’s the presentation of the story, in which Bundy yearns for the perception of being a wrongly framed, charming young man that makes it so intriguing.

The film chronicles the crimes of Ted Bundy (Efron) through the eyes of his longtime girlfriend Liz Kendall (Lily Collins), and tracks their relationship as Bundy maintains his innocence throughout a series of trials. There’s actually very little onscreen carnage; the film takes the time to show Bundy’s manipulation of people as he blames the media and the court system for his conviction, and although a lot of the language becomes repetitive, Efron is convincing. His performance is multilayered in that Bundy wants to convince us of his innocence, and at some points, even though we know he is guilty, we’re not sure if *he* thinks his guilty. We’re seduced into his psychology, albeit in a different way than that of his victims.

This preexisting knowledge of Bundy’s crimes paints the entire film in a different light, as even the early scenes of him beginning his relationship with Liz are cast in a eerie fashion, although the beginning of their relationship is fairly rushed to get into the court cases. While the early depiction of the court cases inform the story and show us the process that Bundy went through as he navigates from hearing to hearing, they largely become repetitive and don’t become truly riveting until the final court case that decides his fate.

Perhaps this is where the story struggles, as it is shackled by history. We all know the ending of the story, and there’s never really a point in which it convinces us that Bundy will get away with it. It definitely shows how the surrounding media circus ensued in the wake of the trial, but the film isn’t really focused on the lasting impact of the legal manipulation other than to further explore Bundy as a character.

Smartly, the film reverts to focus by the end by showing how Liz retains her agency and searches for closure in her part in Bundy’s life. While the character spends time passively sitting around for a large chunk of the film, her slow rehabilitation into society makes for an interesting story. Collins gives the role her all, and although the couple’s early days are largely underdeveloped, we do get a sense of how they have evolved.

So Extremely Wicked, Shockingly Evil and Vile is a mixed bag, and while the film strike the right tone in it’s methodical approach that builds up the most sickening moments, it also begs the question of what all of this means, and why this story was told. Is it a commentary about charisma, and if so what does it say about the significance of the Bundy case? It’s an intriguing true crime story, and the film utilizes the sentimentalization of the whole case to show the trick that Bundy pulled on so many, but other than that it’s often a hollow experience, albeit one featuring a truly magnetic leading performance. Grade: B